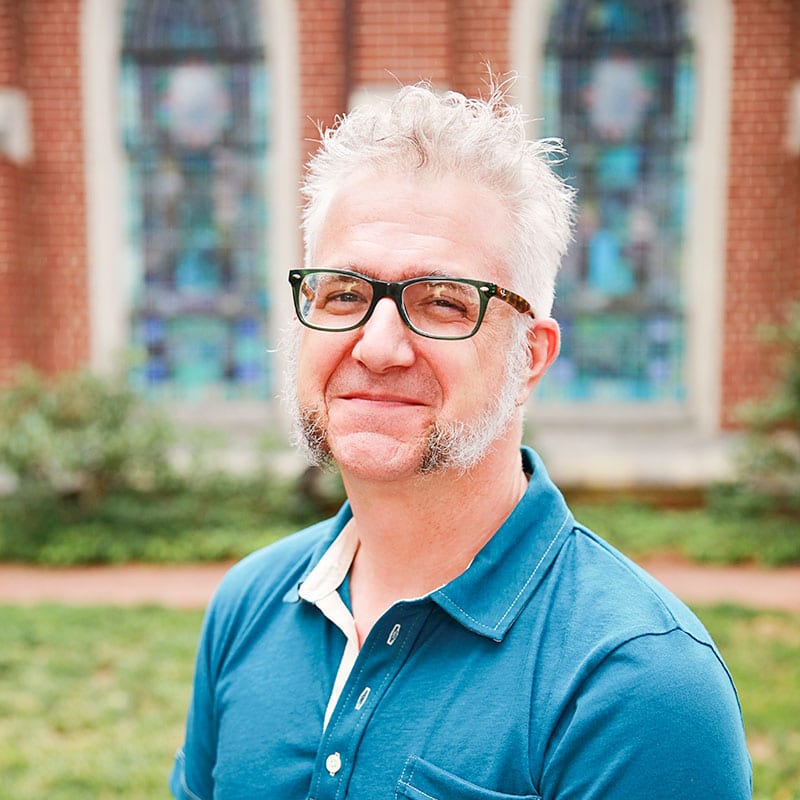 Back in Louisiana, I started off thinking I’d be a writer with a Journalism BA, then a thinker with a History MA — then became both as a high school social studies teacher. I followed my wife Tracey to her professorship at Agnes Scott in 2000, then came to DPCC in 2005 as a 3-yr-old class teacher after my daughter Zoey had graduated and while my son Henry was in the 4-yr-old class. I stayed on in the same room for the next 12 years with the 3s – reading stories, dancing jigs, playing accordion and train whistle all the live long day; and when the time came for me to sing a different song, it turned out that I already knew the tune by heart! I’m honored to be the next director of this venerable institution that’s been in the business of bringing the light of God’s love to children for 70 years. 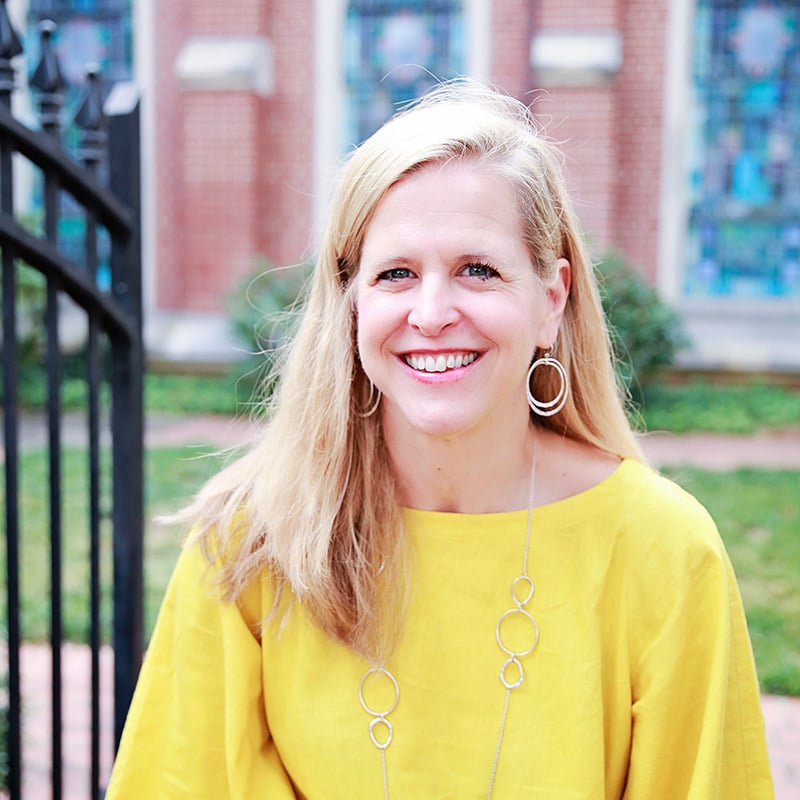 This is my 11th year teaching Kindergarten and my 13th year at DPCC. I taught the 3 day 3’s for 2 years before landing my favorite job as the lead Kindergarten teacher at DPCC. I graduated from the University of Alabama with a bachelor’s degree in Early Childhood/Elementary Education. I taught Kindergarten, First, and Second grade for 8 yrs. in the Archdiocese of Atlanta (St. Thomas More and St. Peter Claver). I am married and have two teenagers who attend Decatur High School. We also have a very spoiled Westie, named Snowy who becomes the subject of a lot of our stories in Kindergarten! I have enjoyed working with young children for as long as I can remember. I believe there is no better job than seeing the world through a 5 year old’s eyes. It is so fun to be able to engage children in meaningful and creative ways. Every year is a new big adventure! It is such a gift to be a part of the wonderful community of DPCC! 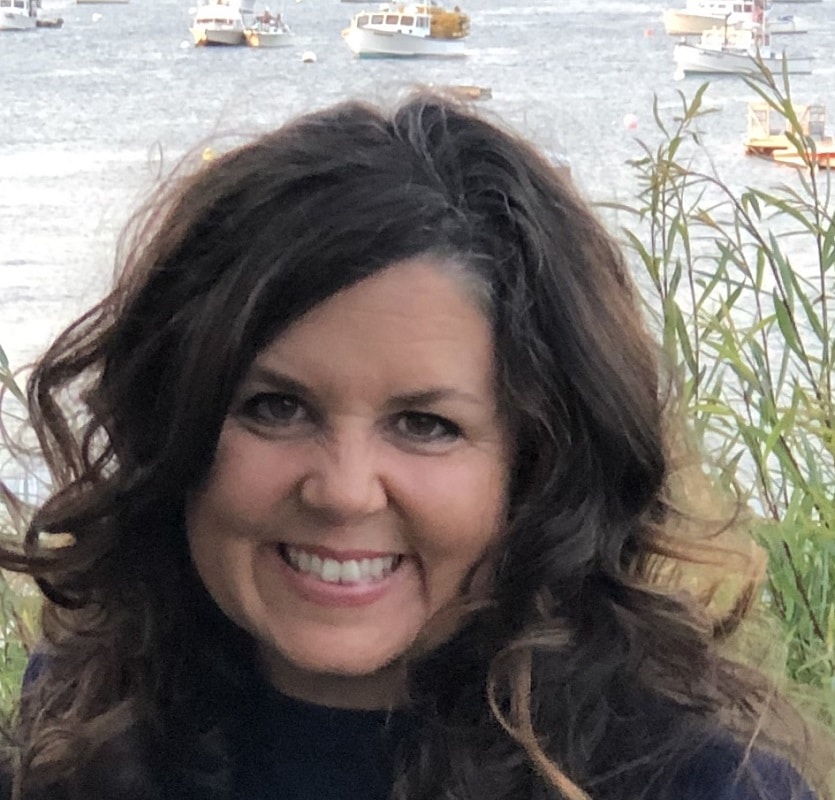 Cristin Davis is excited to be working as the lead teacher in the 4-day 4s class, as well as a supplemental kindergarten assistant. This is her 8th year working at DPCC. She has worked in the Young Twos and Three Year Old classrooms and with PMO. She fell in love with DPCC when her two children, Riley and Brady, began in the two day 2’s class all the way through Kindergarten, and they are almost teenagers now! Cristin has a Bachelor’s degree in Early Childhood Education and a Master’s degree in Reading and Comprehension. Before having children, she taught 12 years in public school as a Pre-K teacher, First Grade teacher, and Reading Specialist. More recently she worked as an instructor and supervising coach in the MAT program at Georgia State, training and supporting new teachers. 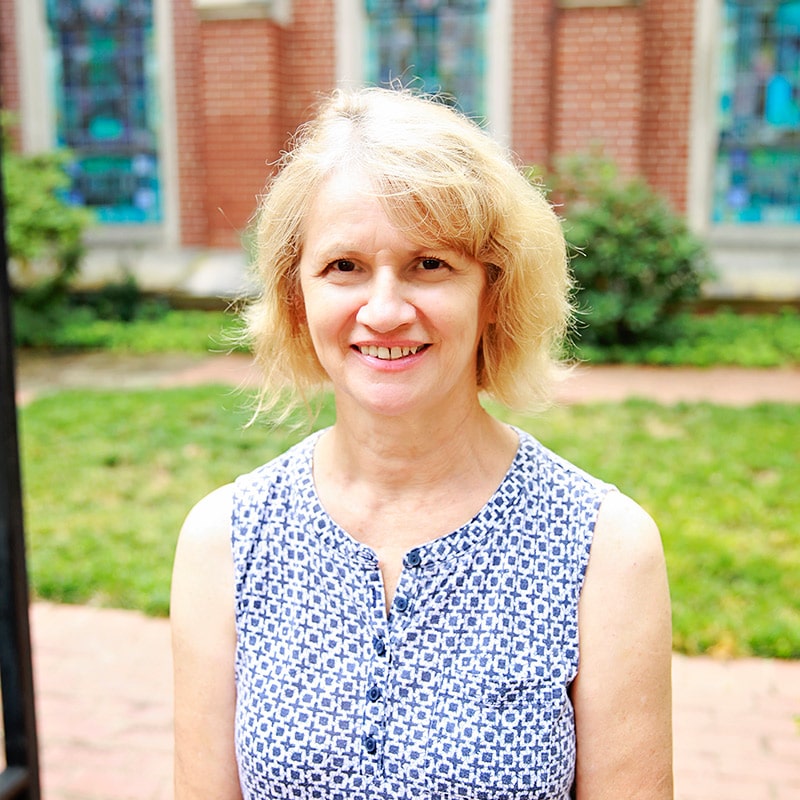 Mrs. Gowler began teaching at DPCC in 2000. After switching to another school for a year, she came crawling back to DPCC and has never tried to leave again. Her claim to fame is starting the school butterfly garden. Two of Rita’s favorite 100 things in life are children and nature, and she always looks for ways to combine the two. 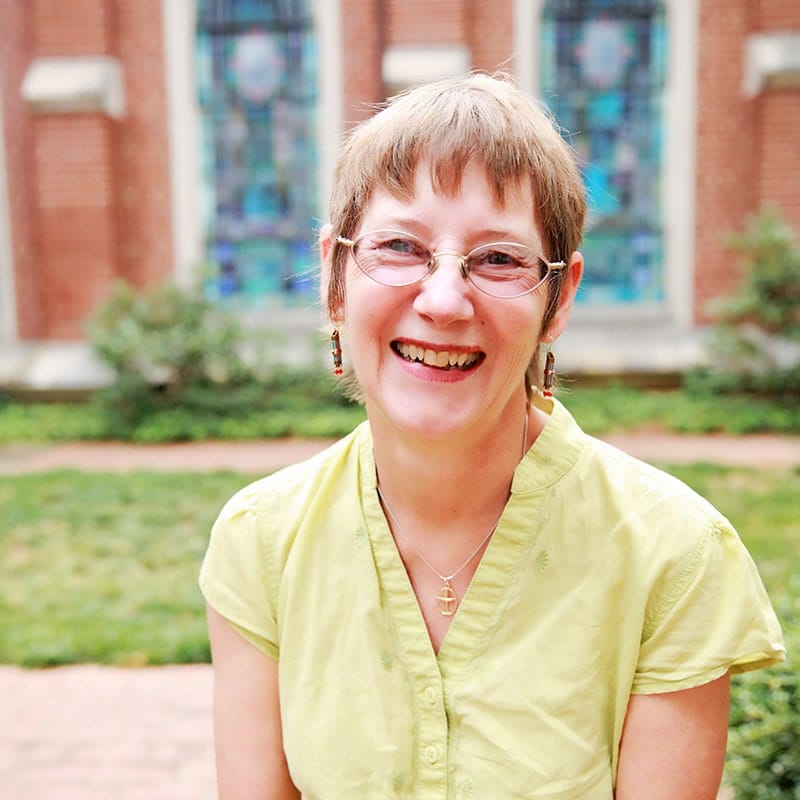 This is my 28th year teaching. I have an undergraduate degree in Primary Education and a graduate degree in Special Ed. They served me well in teaching five years in middle school, 23 years at DPCC with 3s, 4s, and kindergarten (as well as many years teaching dance aerobics to adults). My husband Paul and I have raised 3 children, who are all now grown and all came to DPCC for 4s and kindergarten. I was also a Girl Scouts leader for 14 years while raising the children. For fun I love to dance, run, read, travel, bike, do puzzles, visit my family members and to sit around and talk. 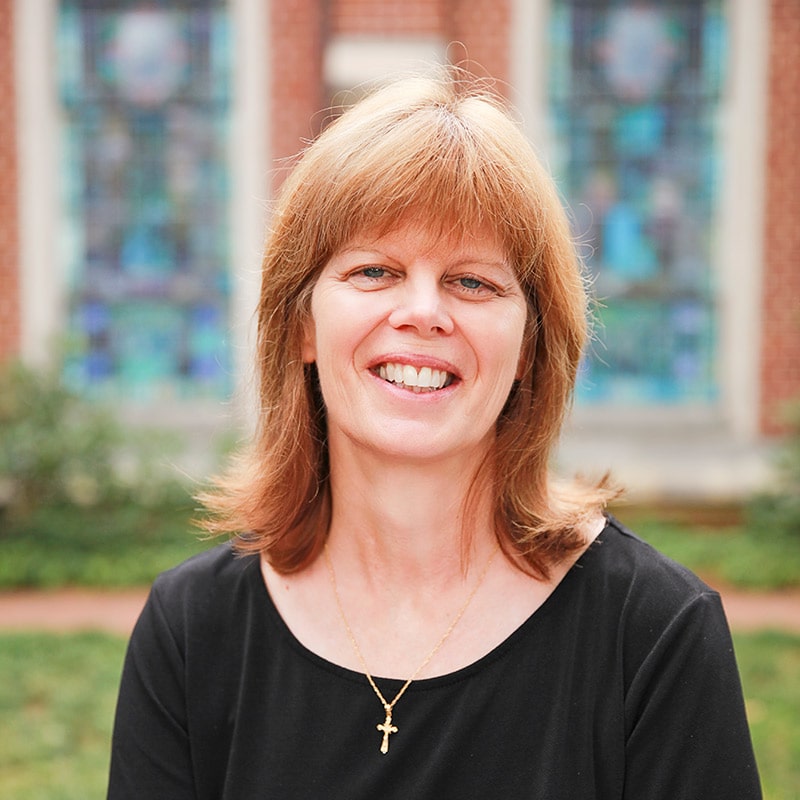 An Atlanta native, Mrs. Weathers has been working at DPCC for 26 years. Her love for children led her to become a preschool teacher. She especially enjoys working with the four year olds through fun and engaging educational activities, to prepare them for kindergarten. Mrs. Weathers has three grown children of her own and four grandchildren, all of whom she equally adores. Her favorite author is Dr. Seuss. 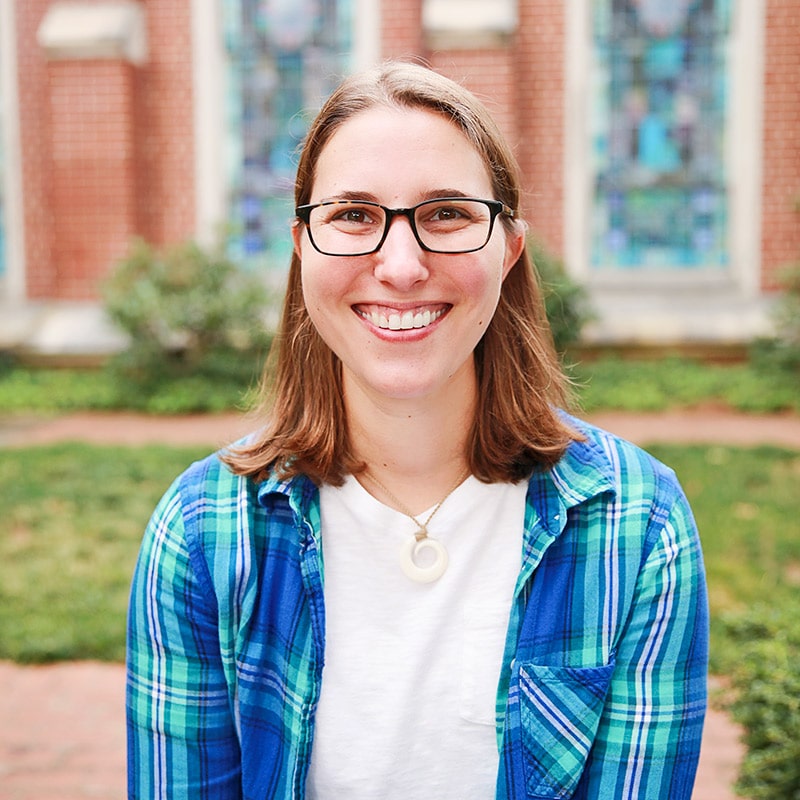 Ariel Wise has been working with children for over five years and is so grateful to have found her calling in life. Being an educator is her greatest passion, which didn’t come to a surprise to her friends or family considering both of her parents were teachers. Supporting students as they grow and learn is in her blood. Ariel graduated from Emory University with a degree in Biology and spent three years managing a neurology lab at Emory’s School of Medicine. Ariel then realized lab work was a little too sterile for her, so she began working with children as a nanny. This work led her to DPCC, and she is so grateful for the opportunity this incredible community has given her. Ariel started her work at DPCC as an assistant teacher in Brandon Laird’s five-day three year old class. She woke up every day that first year excited to connect with each student, and learn as much as she could from Mr. Laird. When summer hit and she missed the students so badly, Ariel grasped the depth of her commitment to education. Currently, she is a co-lead teacher of the five-day four year old class and the facilitator of DPCC’s newest enrichment program, Eureka Science Club. She plans to go back to school for a Master’s in Early Childhood Education. What Ariel loves most about DPCC is the true sense of community and commitment to educating each child’s mind and heart. 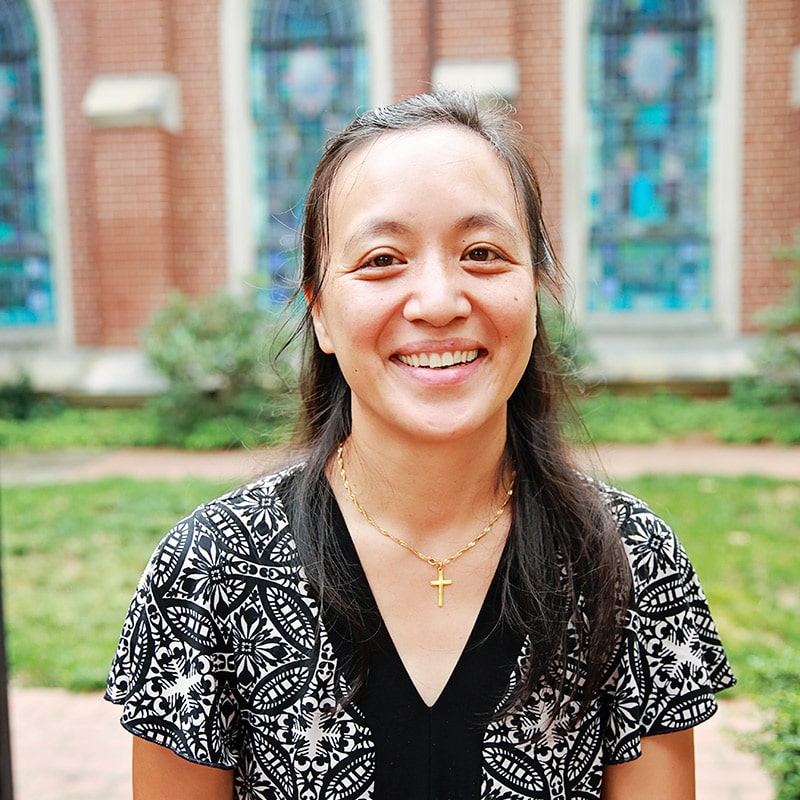 I started teaching at DPCC in August 2015 after quite a detour. In 2002, I obtained a masters degree in Aerospace Engineering in The Netherlands and worked a little over 4 years in the aircraft industry in The Netherlands and Germany. I discovered my passion to teach and work with children soon after graduation while teaching Sunday school. Since then I have spent countless hours volunteering and working with children in school, church and hospital settings. When we moved from Tennessee to Decatur in 2011, we found DPCC through a Google search. DPCC has been a blessing for our two boys and started them off to enjoy school and learning. After teaching 4-year olds during my first years at DPCC, this year I am in a 3-year old class and enjoy seeing how the children make discoveries of the world around them. In my spare time, I enjoy baking, cooking, tinkering, spending outdoor time with my family, running, biking and whenever I can reading a good book. 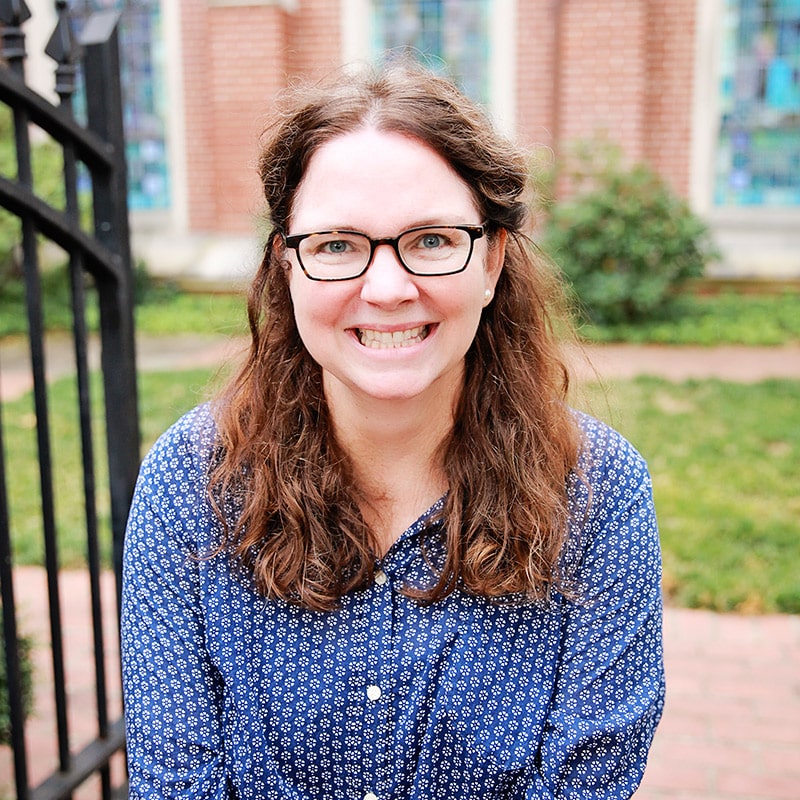 This is Mary Lynn’s 4th year at DPCC. She lives in Oakhurst with her husband and 2 daughters- both of whom are proud DPCC alum. She gained valuable teaching experience working with kindergarten and 1st graders in the Gwinnett County Public School system. Before having children, she taught 5th graders at Kings Ridge Christian School. She feels honored to be a part of the DPCC team and looks forward to coming to school each day. 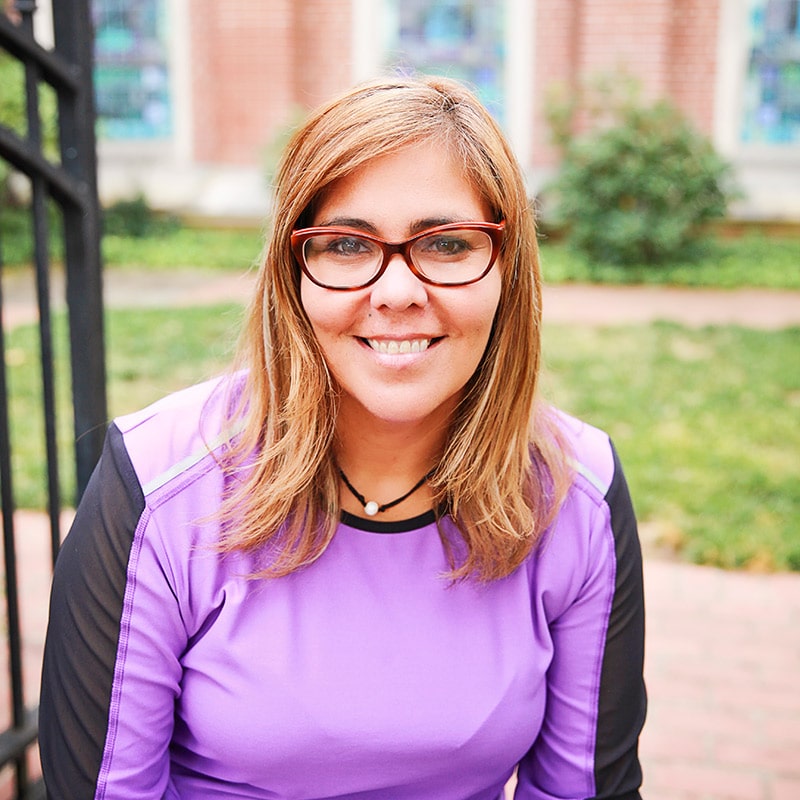 I was born and raised Cuban-American in Miami, and speak fluent Spanish. I attended college in Gainesville, Florida, then went to a special effects makeup school in New York before becoming a firefighter and moving to Georgia. I started as an EMT in 2001 and retired after injuries in 2009. I now live in Decatur and am married with two kids, who both went to DPCC. I love exploring the outdoors, running for my health, and relaxing on the beach. I’ve been working at DPCC for four years, working with both the 2s and the 3s. I enjoy both ages, and have found a love in teaching for watching children grow. My favorite food is tofu but I also love chocolate! 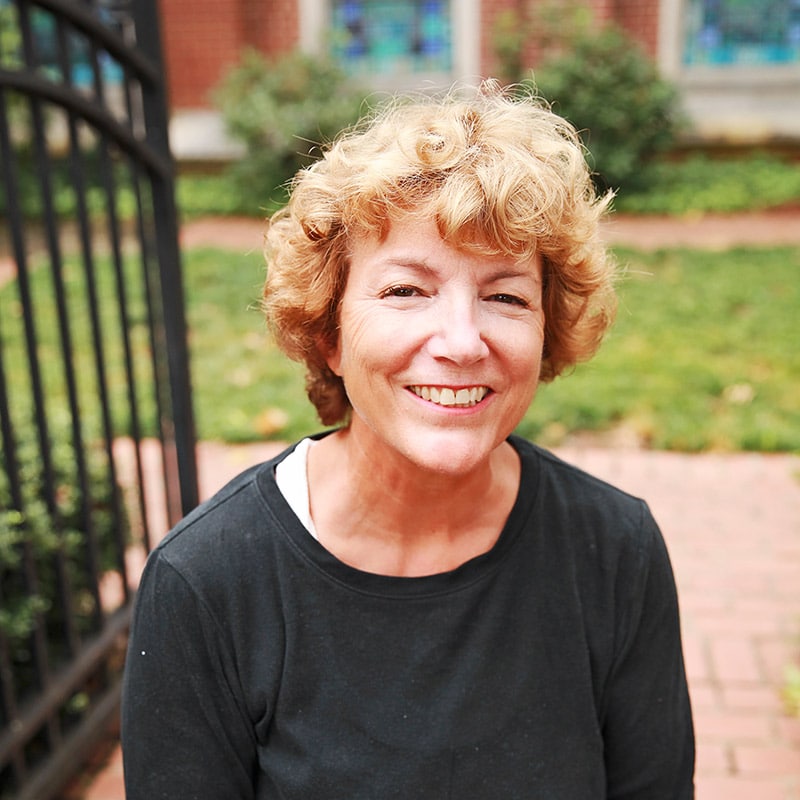 I have been a teacher assistant at DPCC for 15 years. I was married in thechurch and have been a member since 1991. My family and I live in the City of Decatur. We Raised our daughter in the church and she is a Dpcc alumni. She now a junior at the University of Georgia. 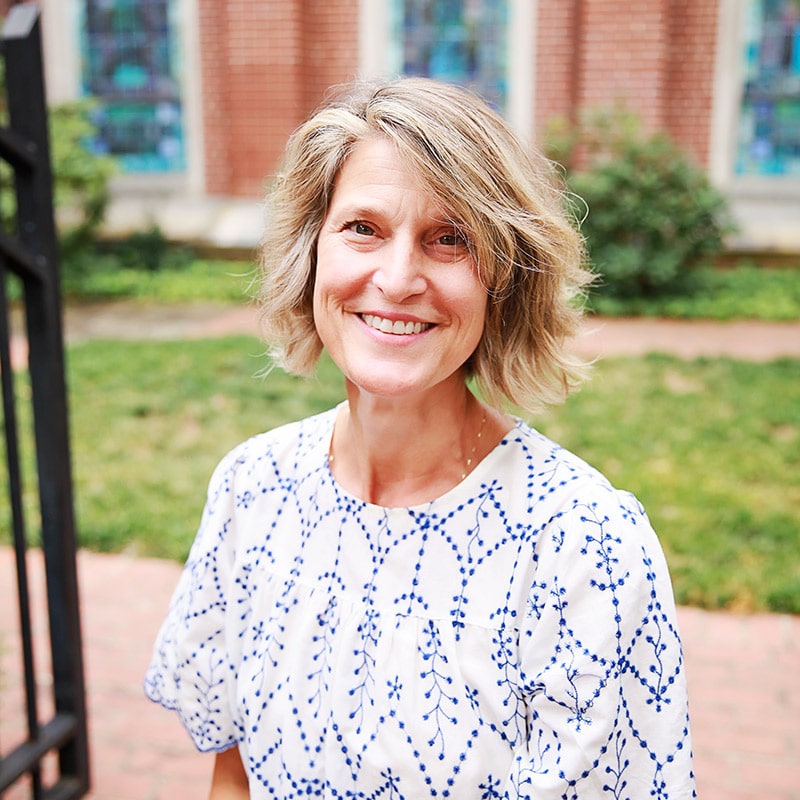 Amy Wilson has been a teacher in the 2 year old classroom since 2011. After her 3 boys ‘aged out’ of DPCC, Amy wasn’t ready to leave the nest and has been lucky to experience the school from the other side of carpool line…as a teacher. She absolutely loves helping the sweet 2’s grow from babyhood into full-fledged little kids! In her life before kids and DPCC, Amy studied Art History and Business and worked for many years as an event planner. 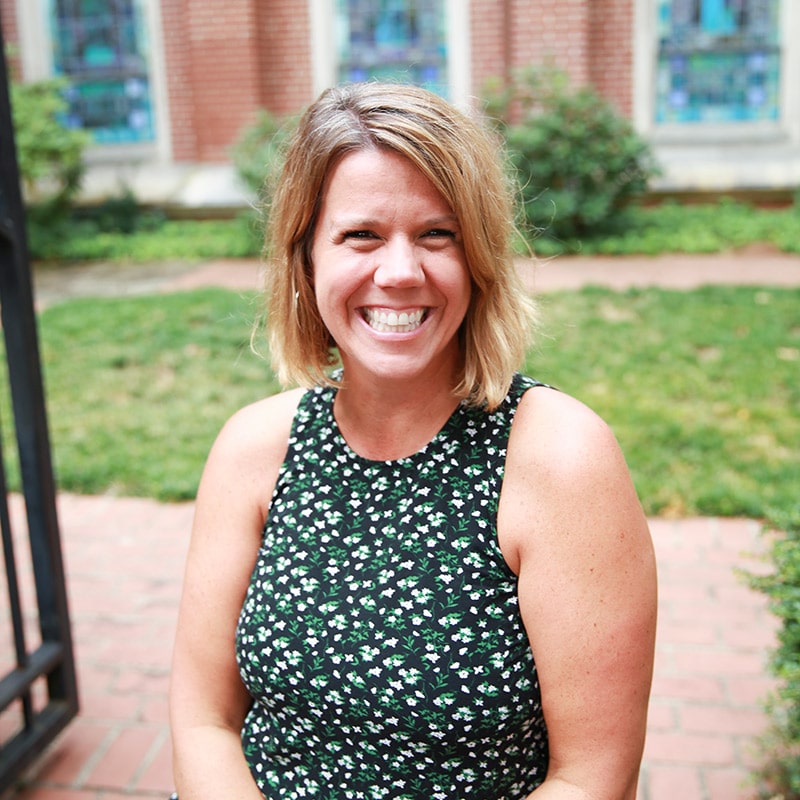 I have been working at DPCC for 3 years in our three day two year old class. My DPCC experience began in 2008 as a parent. As a mother of 2 daughters, I knew instantly that DPCC was a special place and that my children would not only grow and learn here, they would be loved here. Prior to working with children, I worked as a City Planner working with local governments and Community development programs throughout Georgia. Its exciting to be a part of the DPCC team and to work in a loving positive environment “Where Play is Child’s Work”. 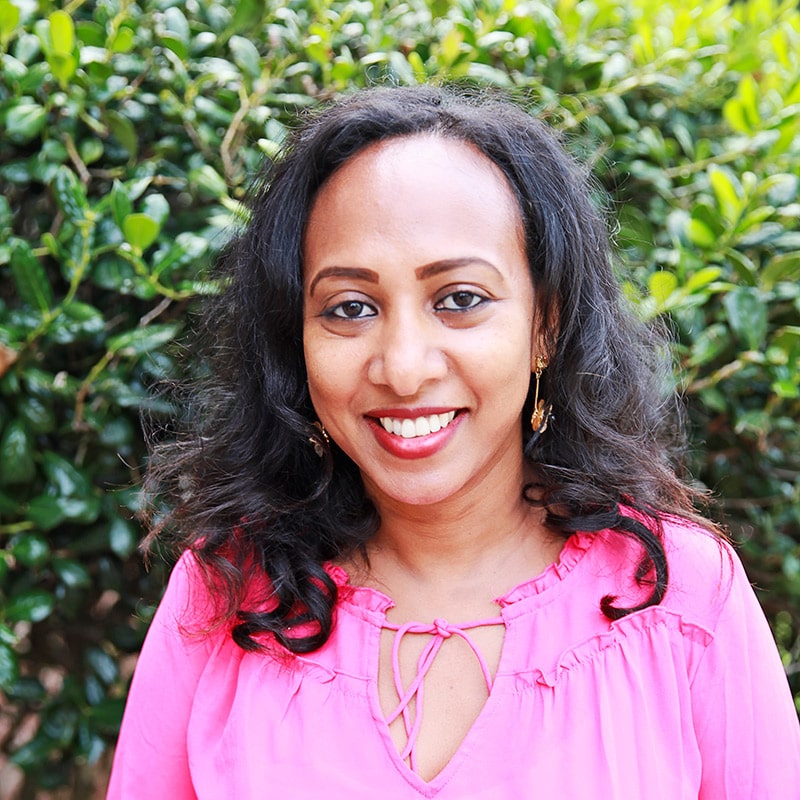 I have been working at DPCC for 6 years. I am currently working with the babies at PMO. I enjoy teaching and caring for the babies. I love watching them grow. I am married with three children. As a parent, DPCC is my number one choice for my children. My two eldest children graduated from DPCC, and now my youngest child is attending PMO this year. 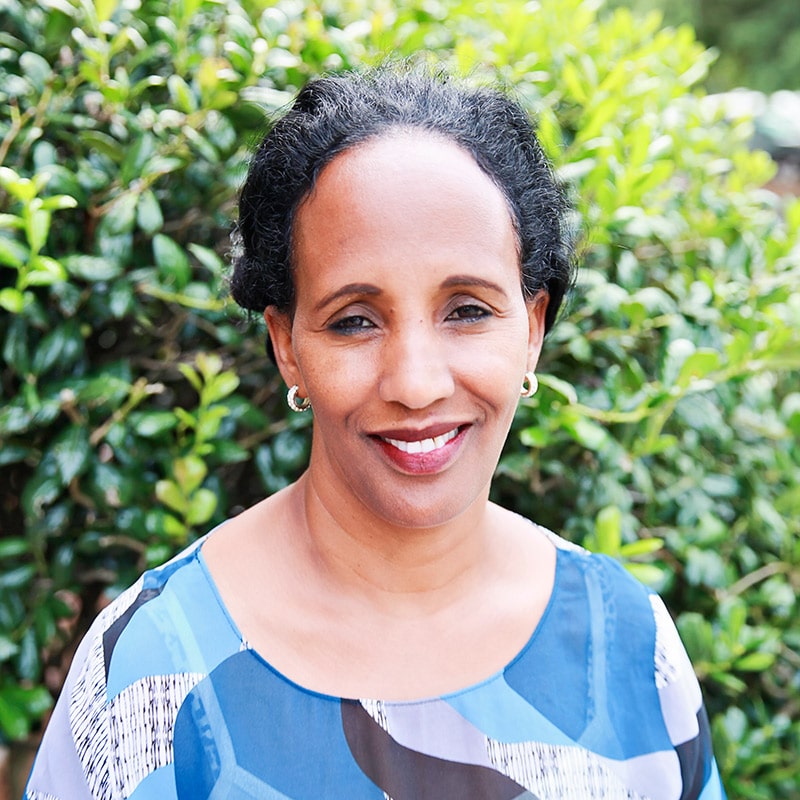 I am married and have two boys who have both gone to DPCC. I have worked at DPCC for 9 years teaching kids from 9 months to 2 years. I love working with the young babies because they are very cute, and I love to watch them grow. 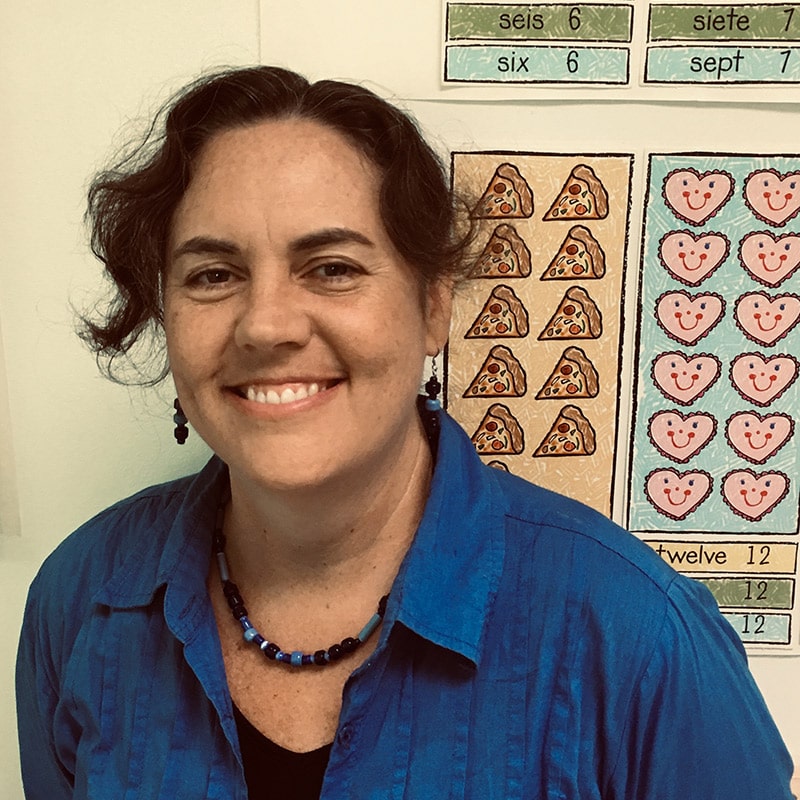 Miche Baskett, a native of Decatur, lives a half-mile from DPCC with her husband (a professor at CSU), twin boys (students at DHS), Nando the Superdog, and twin kitties named by their boys after soccer stars, Lio (Messi) & James (Rodriguez). She learned Spanish from living, traveling, and studying abroad. Señora Baskett has over twenty years teaching experience, with eight of those years at DPCC. She was a founding member of the City Schools of Decatur Spanish team, as a certified teacher, developing the curriculum for all the elementary schools, while teaching students in kindergarten through third grade. She did graduate work in Early Childhood Education, as well as Spanish Language Education at the University of Salamanca in Spain. She truly enjoys spending time with the children at DPCC, witnessing their growth and learning, and she especially loves to share her enthusiasm for the Spanish language! You can read a lot more about Sra. Baskett on her website “Spring Into Spanish.”